Hit enter to search or ESC to close
NEWS

Fee-paying schools were targeted in a cyber attack which accessed parents’ email addresses, it has emerged.

Fraudulent emails sent from school accounts offered a 25% discount on fees for paying quickly via the Bitcoin cryptocurrency.

Newcastle’s Royal Grammar School warned parents of the “sophisticated attack”. It has been approached for comment.

The Information Commissioner’s Office (ICO) said other schools had been targeted and it was investigating.

In an email to parents, the grammar school’s headmaster, John Fern, said it had reported the attack to police.

Because of the “potential breach of data” in the use of parent’s email contacts, it is also liaising with the ICO. 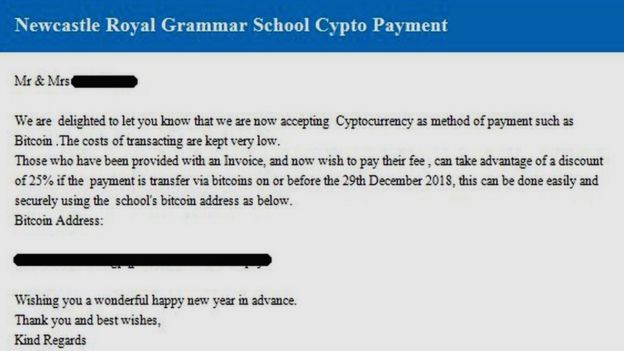 This is required under the General Data Protection Regulation.

The emails, which included spelling, grammatical and punctuation errors, were sent on 29 December from the address of the school’s bursar, who is responsible for fees.

The school told parents it was working with the company that provides its email systems, iSAMS, to “establish exactly what happened”. ISAMS said it would be issuing a statement.

Mr Fern told parents the school would “never ask for money or bank details in this way” and apologised. No financial details were accessed, he added.

The ICO did not provide details of how many schools were affected but said: “[We are] aware of other phishing type attacks that have been targeted towards schools.

“Royal Grammar School has made us aware of an incident and we will assess the information provided.”

FRESH FROM THE BLOG

You can find out more about which cookies we are using or switch them off in settings.

This website uses cookies so that we can provide you with the best user experience possible. Cookie information is stored in your browser and performs functions such as recognising you when you return to our website and helping our team to understand which sections of the website you find most interesting and useful.

Strictly Necessary Cookie should be enabled at all times so that we can save your preferences for cookie settings.

If you disable this cookie, we will not be able to save your preferences. This means that every time you visit this website you will need to enable or disable cookies again.